The OnderwijsMonitor Limburg (OML) is a collaboration between Maastricht University, educational institutes (primary, secondary and tertiary) and government bodies in the Province of Limburg (in the South of the Netherlands, see Figure 1). 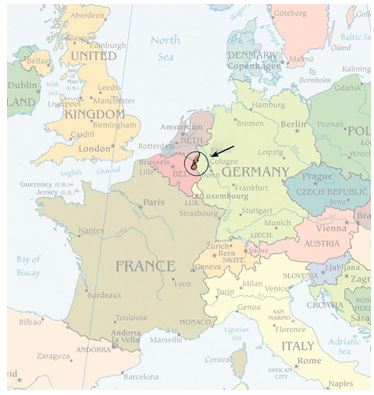 Figure 1. The Province of Limburg

The OML aims to gain insight into the educational development of pupils/students in order to foster the further improvement of education and the transition from education to the labour market in the Province of Limburg, and to acquire knowledge about the dynamics of educational processes in general.

The key elements of the OML are:

These elements are operationalized in a cyclical model, which is illustrated in Figure 2, in Dutch. 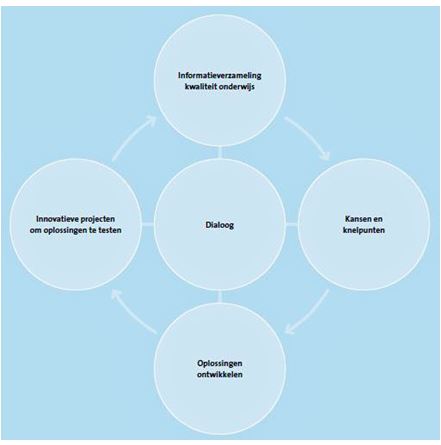 The OML collects data regarding:

The starting point of the OML is information which is already collected within the schools. Additional testing and surveying is done where needed (in close collaboration with the schools).

In 2008, in the Netherlands as a whole, the question was raised as to whether early childhood education was effective in increasing educational chances for pupils from disadvantaged backgrounds. Three pilot studies were set up in the country, one of them in the South of Limburg.

The pilot in South Limburg, called ‘Moelejaan’, led to the establishment of specific early childhood programmes in selected preschools. The development of the children was mostly monitored in preschool and in the first two years of primary school (Kindergarten). However, some additional projects extended this monitoring to other grades in primary school as well. In addition, some observational studies involving preschool children were added to the initiative to get more detailed insights into the differences in the implementation of early childhood education programmes.

As the Moelejaan initiative progressed, the question was raised as to whether longer term outcomes should be measured, i.e. whether early childhood education still has effects at the end of primary school. This question was shared between researchers and educational practitioners, and it was mutually decided that monitoring should also take place in the final year of primary school (sixth grade). This initiative was named ‘Balaans’.

Finally, in 2009 conversations were held with school boards in secondary education in the region regarding the need for a similar monitoring of students in secondary education. Reference was made to the international PISA study (OECD), where 15-year-old students are tested on their math, science and language skills every three years. The school boards felt a need for a more structural measurement of these skills in the region, supplemented with social-emotional aspects of student development. This initiative was named ‘Inventaar’.

All of these initiatives were meant to take place either annually or biannually, which resulted in a longitudinal programme. Since all schools participated, students were automatically followed through their secondary education after leaving primary school. Although all three initiatives had their own financing and project coordination, the information collection was largely done in cooperation. The information collected included:

Feedback on performance and development

The data collected was primarily used to provide feedback to schools and school boards about school performance and development. This allowed school boards and schools to adjust their policies and to measure and evaluate the effects of educational policies and practices. At the core of the initiatives was an ongoing dialogue between the partners (i.e. the schools, school boards and university) about the findings and about how to measure the educational development of the children. In addition, at an aggregated level the data allowed for scientific analysis of key questions in the region and in the educational field in general. Examples of key questions were: What drives school performance? What regional differences are there in school performance?

In 2014, these initiatives, which had been brought under an umbrella programme named ‘Kaans’, were merged with an ongoing initiative in higher vocational education to stimulate the professional development of teachers. To emphasize the relevance for the whole province of Limburg , the programme was named the Educatieve Agenda Limburg (EAL). This programme received additional funding from the Province of Limburg. The main focus of the EAL is on deepening the dialogue regarding education and extending the cooperation between the educational institutes and partners, as well as between the educational practitioners and researchers.

The monitoring of activities that was formerly executed within the Kaans programme has now been incorporated into the framework of the EAL under the name ‘OnderwijsMonitor Limburg’. In addition to the monitoring of the educational development of children, the monitoring of teacher quality was added as one of the main domains of interest.